The Abbott Government is currently evaluating options for the replacement of the navy’s Collins-class fleet of submarines. Despite previously promising to build new vessels in Australia, Senator Johnston is now actively considering offshoring the work. 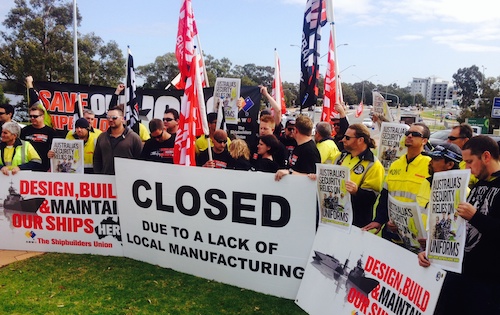 In August, 16 Japanese defence experts toured naval shipbuilding facilities in both Western Australia and South Australia, with Minister Johnston confirming they had looked at naval and submarine technology.

More than 50 boilermakers, fitters, mechanics and electricians from the Australian Marine Complex stand to lose their jobs if naval shipbuilding goes offshore.

Since 2006, the Kwinana strip has lost almost 30 per cent of its full time manufacturing workforce, or more than 5,000 jobs, according to the Australian Bureau of Statistics.

With the Abbott Government considering building new naval ships and submarines in Japan, even more jobs will be lost as defence maintenance and repairs operations cease at the Australian Marine Complex.

We strongly oppose this proposed move and say Senator Johnston should be defending local jobs.

With thousands of naval shipbuilding jobs at risk around the country, we need the Defence Minister to defend Australian jobs. Western Australia cannot afford more manufacturing jobs to go offshore.

The mining boom is clearly winding down, and we need a plan for Western Australian jobs that ensures there are highly skilled and well paid jobs into the future.

Any plan for jobs in Western Australia must include a strategy to build upon our shipbuilding capabilities, but it will be hard to do this if its own government sells out the industry.