Colin Barnett: The Man With No Plan For WA Jobs Disaster

The WA economy is in freefall, and Colin Barnett has no idea what to do.

There are now 95,700 people unemployed in Western Australia. The highest number of people looking for work ever recorded in our State’s history.

And there aren’t many reasons to be optimistic.

Capital investment has fallen off a cliff.

Big construction projects are winding down.

But the main concern is that our Premier hasn’t got a clue what to do next. 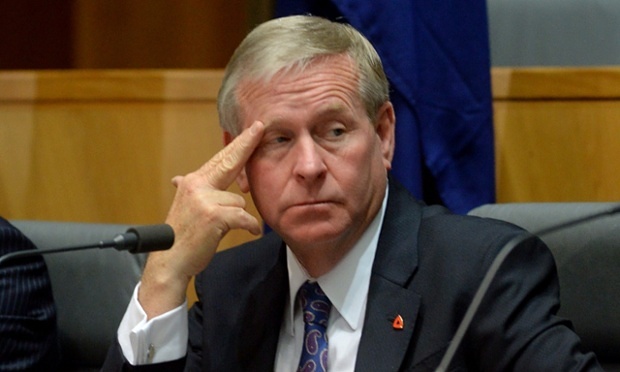 Having spent up big during the boom times on Perth city projects that he thinks will leave his mark on our capital but do nothing for sustainable economic development, Colin Barnett has put our State in a truly dire position.

A stadium that will employ a handful of people, more or less exclusively on weekends. A hole in the ground at Elizabeth Quay that will employ no one, except in offices that are now no longer needed due to record CBD office vacancies. A sunken city rail line that looks more and more indulgent as working people in Western Australia become more desperate by the day.

In his own words, there is now “zero” capacity for extra infrastructure that would create jobs, eliminate bottlenecks and increase economic capacity.

Government investment is a zero-sum game: a dollar spent on city-centric beautification can’t be spent again on ports, rail lines, roads and skills, the essential drivers of economic activity and jobs growth in our state.

Under Barnett’s leadership, the Department of State Development has become even more resource-industry centric, while manufacturing and tourism wither on the vine. Our economic profile looks more third-world every day.

The Government’s 10-point manufacturing plan was dead on arrival and made no serious investment in our manufacturing sector. He made no attempt to maximise local content for small and medium sized business from the boom, letting go a once in generation opportunity to diversify our State’s economy. His government in fact cut the meagre manufacturing support within the Department of Commerce.

Barnett blamed tanking Western Australian tourism figures on the fact that tourists would indeed have to travel to Western Australia. Tourist numbers have grown at an average of 11.5 per cent around Australia over the past financial year, while languishing at just 1.2 per cent in WA. Another failure. More job opportunities lost.

When asked in October what advice he’d give to WA jobseekers, the Premier said “people have really got to be prepared to be flexible do maybe even a lower skilled job and accept a significantly lower income.”

At best it, doesn’t sound like much of plan and at worst it is downright insulting to the people he is supposed to represent and support.

Treasurer Mike Nahan, the fourth Treasurer under this fiscally erratic Liberal government, told the West Australian today that unemployment has come up much quicker than he’d “hoped” and that he “hoped” it would “swing down” quickly.

The 95,700 people looking for work in WA right now need more than hope. They need a plan. They need leadership on jobs. And it’s looking increasingly likely that Colin Barnett is not the Premier to deliver either.